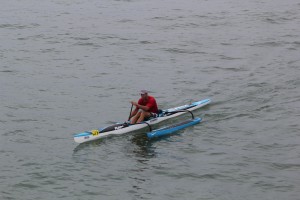 There is no denying Todd Cohen is Australia’s best OC1 paddler, and with good reason. Having recently added a fourth national OC1 title to his name he is known in the paddling fraternity as the man to beat, and at almost 7ft tall and a body of muscle, there are few who can.
Todd was a late starter in the sport, picking up his first paddle at the age of 28, and joining a six man crew in Mooloolaba. He later turned his attention to the OC1, admitting to spending almost every day with a paddle in his hand perfecting the craft.
It wasn’t long before Todd won his first race, quickly building a reputation as a fierce competitor and one to look out for in the water – not that you could miss him. His impressive scorecard also included race wins in Cairns, Coffs Harbour, Gold Coast, Hamilton Island and the Cook Islands.
Now 40, Todd said he was starting to tone down his training and looked forward to a break from competition as he and wife Rani, welcomed their first child, Hunter Cohen in January.
Todd shares with IFA how he has continued to dominate in the sport as well as an insight in to his rigorous training regime.

IFA: Tell us about your first few years in the sport?

Todd: I first joined a six-man crew in early 2000. It was all new to me and the first sort of water sport I had done. Before then I was just doing a bit of running and gym, but nothing competitive. A friend introduced me to the sport and I enjoyed the team side of it, joining a six man crew for a few races and really enjoying it. I picked up the OC1 a few years later as I wanted more of a challenge now that I had the hang of it, although it took me a while to get any good in an OC1. That’s the thing about a six-man, you don’t really have to think too much about what’s going on because you’re part of a machine, you’re a cog for pulling the boat along and applying force, but when you’re on your own you have to think about everything, from reading the ocean, the best line to take and technique, as well as endurance and fitness. You have to cover every aspect of paddling; it’s more skill development and takes a bit longer to get your head around.

IFA: How often do you train? Is it more before an event?

Todd: I generally target specific events as it’s hard to train all year round and maintain that level of fitness. I usually pick up the tempo about three months out and start to get more frequent with my training and the intensity I train – usually about five to seven or even eight times on the water each week. In the off season it’s more like four times on the water.

IFA: What type of training do you do? Is it always on the water?

Todd: No, I do like to mix in a bit of cardio with a spin class at the gym, which helps maintain my overall fitness. I have tried a whole heap of cross training over the years, weights, yoga and even a bit of swimming, but I find the spin class to be the most effective at maintaining my cardio fitness. However, I would say about 80 to 90 per cent of the training I do is sport specific.

IFA: How about when you’re training for a race?

Todd: Throughout the year I might do longer endurance paddles but when it is closer to a race I start to mix up shorter, sharper and more intensive training sessions and maybe one endurance session a  week, but that depends on the races you’re training for. If you’re training for a race like Molokai, that’s 3 hoursyou’ll be paddling for so endurance training is important, whether nationals was 2 hours so I include short, high-intensity training for that.

IFA: What are some of the challenges you face?

Todd: Probably the biggest challenge for me is motivation. Because I now live on the Gold Coast, I am often out training on my own, whether I have found training in a squad or with at least one other person was more beneficial for me – it also makes it more enjoyable.

Paddling is a low impact sport, I have never suffered any major setbacks, the only thing you get is the occasional niggling injury, which can be as simple as a blister or the skin off your arse when you’re training continually and they never get the chance to heal!

Todd: I am not big on taking supplements; however I do take protein powder for training recovery. During a race I might put some electrolytes in my drink and take some gel carbohydrate shots but usually I focus on clean eating leading up the race, maybe a high protein breakfast of eggs and bacon and banana before.

IFA: What is your greatest achievement?

Todd: Probably winning my first national title in 2011 at Coffs Harbour, which a few of the top Hawaiian paddlers came out for. It was a long, flat race and I had trained hard. It was a good race because of the calibre of competitors.

IFA: What is your advice for someone starting out in the sport? 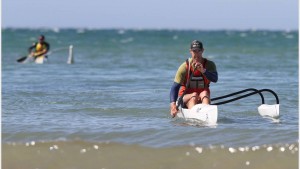 Todd: Find the aspect of the sport you love the most, whether that’s in a team, for social or individual. As long as you are enjoying it then training is never a chore.