Wim Hof – The Ice Man and His Method

The Iceman – Wim Hof. Have you heard of him?

If not, you’re in for a real treat, because this guy truly is a legend when it comes to extreme physical fitness.

Wim Hof is a Dutch extreme athlete best known for his ability to withstand extreme cold, which he attributes to his Wim Hof Method breathing techniques based on Tibetan Tummo meditation but without its religious components.

According to his personal website, Wim Hof got his nickname “The Iceman” after he broke a number of records for resisting cold. 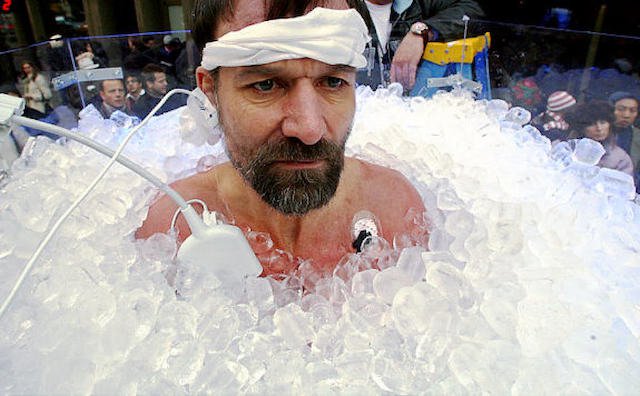 Some of his feats include climbing Mount Kilimanjaro in shorts, running a half marathon above the Arctic Circle on his bare feet, and standing in a container while covered with ice cubes for more than 112 minutes.

Wim Hof said on his website that he is convinced that human bodies were capable of doing the same exceptionally things his body allowed him to do. Therefore, he developed the Wim Hof Method, which gives ordinary people the tools to take control over their body.

According to Wim Hof, his method is based on three powerful pillars, including:

The first pillar of the wim hof method is the cold.

Wim Hof said on his website that exposing your body to the cold in the right way starts a cascade of health benefits, including the buildup of brown adipose tissue and subsequent fat loss, reduced inflammation to facilitate a fortified immune system, balanced hormone levels, improved sleep quality, and the production of endorphins— the feel-good chemicals in the brain that naturally elevate your mood.

The second pillar of the wim hof method is breathing. He said, we’re always breathing, yet we’re mostly unaware of its tremendous potential. Heightened oxygen levels hold a treasure trove of benefits, and the specialised breathing technique of the Wim Hof Method unearths them all: more energy, reduced stress levels, and an augmented immune response to swiftly deal with pathogens.

The third pillar of the wim hof method is the mindset. He said, mindset or focus is the foundation of the other two: both cold exposure and conscious breathing require patience and dedication in order to be fully mastered. Armed with focus and determination you are ready to explore and eventually master your own body and mind.

Go the https://www.wimhofmethod.com to see more on the Wim Hof Method.